They paint the chicks and sell them.

When this practice of selling painted chicks to the public began is unknown, although it has been around for many decades. It is something very common in China, although it is also very popular in countries like Colombia or Mexico. In some places, dyeing chickens has been a long tradition during the Easter season. 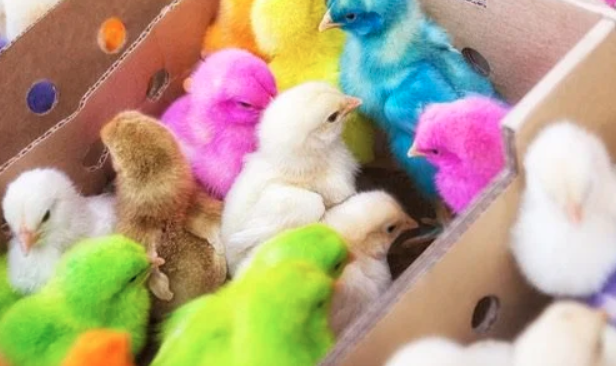 In countries like the United States, chickens are often inked on various farms using various colored vegetable dyes such as red, neon, blue, yellow, green, black, cinnamon, pastel pink, among others, to sell them as ornaments or toys at a price low. When they lose their color, they are usually abandoned, although many die from the products used in their plumage.

In other countries such as Mexico, India, Morocco, or the Philippines, their production is continuous, and they are usually very common in tourist areas. They stain with toxic substances like peroxide, fabric dye, tartrazine, and many other chemicals.

Although it is hard to believe it, many of these animals are stained in groups and poured into a bowl. There they are spun as if they were a mass, despite being living beings. Between the toxic product and careless movements, there are more

likely to die. The chicks are put in a bowl to proceed to inking them.

This Is How They Are Painted

There are two types of processes, and newborn chickens are painted. One of the most used products is aniline and a colorant. Aniline is used as a fixative for said dye. Most chickens die hours or days after going through the process because depending on which dye people use, it is normal for some birds to die during sales since most of them are so toxic. 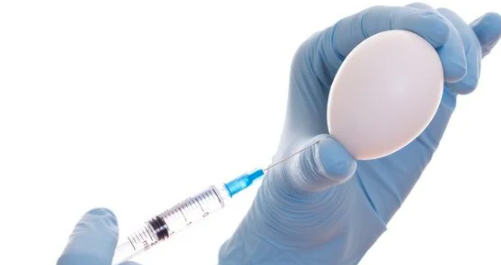 Another way to do this is to dye chicks that are inside the shell. This procedure involves putting an injection into the embryo. Vegetable coloring is used in chicken eggs between 11 and 14 weeks of incubation. When finished, proceed to close the hole with melted paraffin, making sure that the entire hole is completely covered. The chances of making a mistake at the time of injection, miscalculating the time limit, or not securing the hole well after the injection, among other inconveniences, can be very high.

The color is injected into the shell.

The process can be carried out with inorganic substances so that an immune response is not generated in the animals and so that after a month, they are absolutely normal.

Another Way to Get Colored Chicks

With this technique, you may not get a green, blue, fuchsia, or orange chicken, but you can make its plumage more intense. Xanthophylls are added to the chicken feed, colorants that give a stronger yellow or white to the legs and beaks of the chickens, and slightly darken the tone of the egg yolks.

To curl the curl, there are those who, after dyeing the chicks, add a cap on top to make them more funny, and they do it by adhering it with glue. Undoubtedly, this practice has been punished by many associations, however, its economic nature prevails because they continue to be given away in piñatas or sold in markets in countries such as the Philippines, Costa Rica, Colombia, or Morocco.

They Are Not Toys

When acquiring an animal, one of the values ​​that can be instilled is the responsibility of caring for a pet. However, this is not the best way to do it, especially since children begin to lose interest when their initial appearance changes. The chicks grow -in the best of cases if the toxic products have not damaged them so much-, their feathers also, and the initial color begins to disappear. It must also be borne in mind that a living being is not a toy. What Do Lizards Eat? (Babies and Adults) How Having a Pet Affects a Child